“The U.S. Navy’s investment in its own fleet of high-altitude, long-range unmanned aerial systems called Tritons marks a detour from the military’s longtime use of satellite technology to connect its arsenal of big platforms such as Global Hawks and Predators.

The communications payloads for the family of drones are built to leverage primarily X-band military frequencies, a revolutionary undertaking. The X band has been around since the beginning of satellite communications (SATCOM), but it has gone hand in hand with mammoth antennas and point-to-point services—until now. The Navy’s pursuit of the new pilotless aircraft is one example of sweeping changes transforming the satellite industry that could vastly improve Defense Department intelligence, surveillance and reconnaissance (ISR) capabilities.” 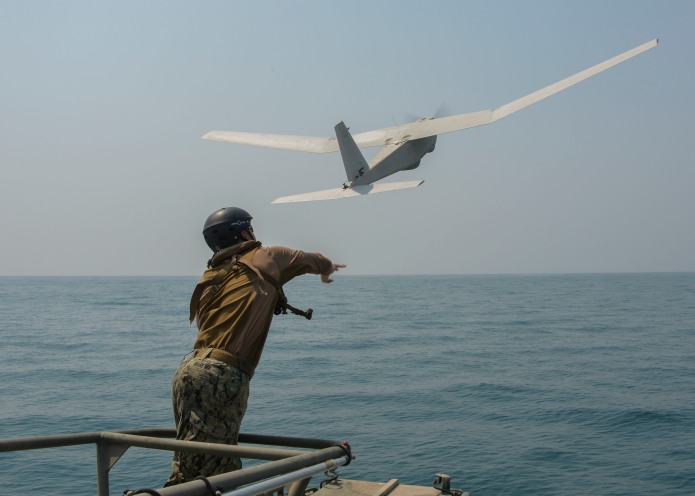 “The United States Navy has tested and deployed the RQ-20B Puma small unmanned aircraft system (UAS) aboard a Flight I Guided Missile Destroyer (DDG Class), according to an AeroVironment Inc. announcement. Some of these exercises included the use of the company’s fully autonomous system to recover the aircraft aboard a ship.

Following completion of a Puma AE intelligence, surveillance and reconnaissance mission, the AeroVironment precision recovery system provides for the autonomous on-board recovery of the aircraft, without interrupting the ship’s operations. Because the Puma AE is also designed to land and float in water, operators can choose to recover it from the ocean, should mission requirements dictate.”